Star Wars: The Force Awakens: The Next Generation, by Tyler Smith 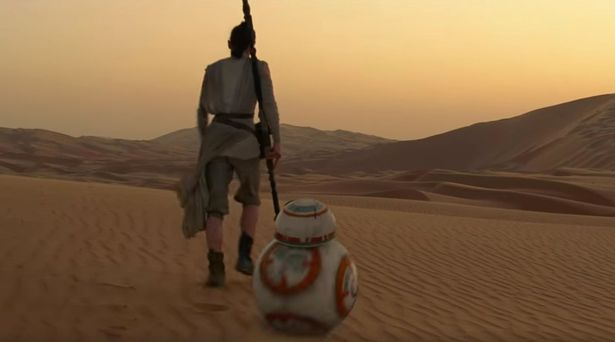 If there’s one thing that can be definitively said about J.J. Abrams’ Star Wars: The Force Awakens, it’s that it accomplishes its goals. Not only was the film meant to wash the taste of the prequels out of our mouths, but it also had to believably continue the stories of characters we’ve come to know and love, while introducing brand new characters and adventures. That’s a lot to do, and tackling just one of those successfully would be a job unto itself. However, Abrams shows himself more than up to the task of continuing the Star Wars saga, with an emphasis on audience connection and thankfully very little pandering.

The story picks up several decades after Return of the Jedi, as the forces of the Empire have reorganized themselves into The First Order in an attempt to regain control of the galaxy. Their primary opposition is the Resistance (previously the Rebel Alliance), propped up by the newly-reformed Senate. In the midst of this, we get a ragtag group of reluctant heroes, each of whom are either desperately chasing or running away from their own personal demons.

These new characters arrive fully-formed, each with his or her own history and motivations, some of which are explained outright, while others are only ever suggested by pained expressions on the actors’ faces. Like the original 1977 film, the characters display varying levels of heroism and competence, immediately making them not only sympathetic, but relatable.

This also extends to the villains, whose own desire to prove themselves makes them particularly dangerous. Ego and overconfidence, as intimidating as they can be, are stable. Desperation, insecurity, and inexperience can make a person unpredictable, and layering these qualities onto the young leaders of The First Order creates tension every time they’re on screen.

The new performers all handle themselves well, being able to play notes of comedy, fear, and excitement, while still maintaining consistent characterizations that we can relate to. The primary leads, John Boyega and Daisy Ridley, are very watchable, with enough on-screen charisma to be able to hold their own not only in the midst of outlandish fantasy elements, but beside established-and-beloved characters like Han Solo and Chewbacca. We believe these characters belong in this world, and are just trying to make their way through it, just as Han, Luke, and Leia did in the first film.

Special attention should also be payed to Adam Driver as the primary heavy, Kylo Ren. A disciple of the late Darth Vader, Ren has embraced the Dark Side as fully as he can, while still feeling the occasional sting of conscience. Ren is temperamental and brash; a character that gave into the temptations of the Dark Side at just the right time in his life so as to lock in his immaturity and anger permanently. Kylo Ren is perhaps the most emotionally volatile of the Star Wars villains, and Driver plays him as seething, fearful, and extremely skilled, making Ren – like the heroes – relatable and human, possibly to the discomfort of the audience.

And indeed the shakiness of the characters seems to be a product of their larger environment. Abrams has created a galaxy still in transition after the fall of the Empire. The death of Emperor Palpatine at the end of Jedi always appeared to have hastened a drastic and immediate positive change in the galaxy. But those in power rarely go quietly, and The Force Awakens wisely shows us a world that is uncertain and wary, always on the verge of falling back into darkness. This is a marked difference between the original trilogy and the new film, and it is most welcome. Despite the presence of yet another Death Star, Abrams and his writers choose not to recycle too many of the specific story elements from the original trilogy, opting instead to try to capture its spirit in the midst of a new set of circumstances.

While the film is mostly a success, it does feel like Abrams and his actors are still finding their sea legs, figuring out where they fit in the larger mythology. As a result, we get a film that mostly sets the groundwork for much larger adventures in the future, ultimately feeling like, if such a thing is possible, “minor Star Wars“.

This is a small quibble, however. Like the characters in The Force Awakens, the film itself has something to prove, both to us and itself. It needed to justify its own existence, not merely as a reintroduction of a very lucrative franchise (as many cynics could understandably characterize it), but as a genuine and sincere continuation of the world and characters that have come to mean so much to film fans throughout the decades. And, to that degree, as well as several others, J.J. Abrams has succeeded and The Force Awakens is a worthy entry in the Star Wars saga.