The Non-Science of Watching Movies, by David Bax 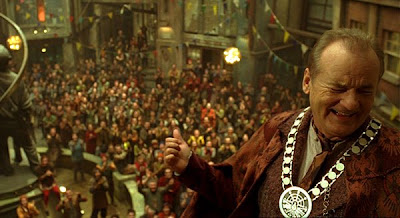 I remember watching an interview with Nirvana in which they joked about the idea of there being a recipe for a perfect pop song. Measure out just so many choruses and just so many verses, add the bridge at just the right moment and, in about three and a half minutes, you’ve got a hit on your hands. Of course, it’s not that simple with pop music and it’s not that simple with movies either.

There are ingredients that go into any film. The broadest of these each have their own Oscar categories but we geeky, obsessive cineastes know that those are just umbrellas, each engulfing dozens of the tiny parts needed to make the movie machine go. But to talk about film in mechanistic terms could once again lead one to believe that there is a recipe, a formula, for a successful picture. Hit the right note on each ingredient and you’re good to go.

The truth is far more complex. In fact, there is no knowable “truth” on the subject at all. That’s why art isn’t taught by science teachers. There exists an almost arbitrary sliding scale in movie-making. Enough of one ingredient will perfectly compliment a bit of another but the proportions are different for each movie. If filmmaking is like cooking, it’s like doing it while the laws of physics keep changing and still trying to end up with a delicious lemon cake at the end.

According to these tenets, the ways we watch and judge movies must necessarily be as mercurial as the ways they are made. Our standards have to change to fit those of the film in front of us.

These thoughts occurred to me in the hours after seeing Gil Kenan’s City of Ember. If I carried a checklist of criteria on a clipboard into every screening, this film might not have received a passing grade. It’s a story populated with archetypes instead of characters and anyone can figure out exactly how it’s going to end from pretty early on. But thanks to an arresting aesthetic and snappy editing, the movie was far from unenjoyable.

It’s not that this is a lesson I needed to learn. I feel like I’ve always understood it. It’s just that every time I catch hell from my fellow film geeks for enjoying or even giving a shot to a movie that they’ve written off as uncool, I’m left to wonder why it’s so difficult a lesson for them to comprehend.